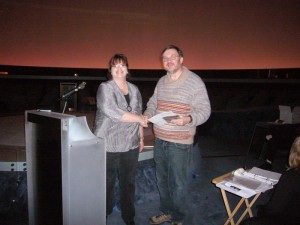 In the fine tradition of previous Presidents, I too have gone behind the backs of my own committee for this award. Although the committee had chosen an excellent candidate, I thought this person must receive this award this year. This individual has served on Council in just about every position there is, has served on just about every committee Council created and has been to just about every event the centre has hosted. The only time this individual has missed an event was when he was out of town. Everyone knows him, as he is actively involved in both the Club and the Observatory. I am speaking of Bruce McCurdy. After 21 years of serving on Council, Bruce has decided to step down from his Council duties to make way for fresh ideas from new members of the Club. His input and experience will be missed at Council. It is my honour to present Bruce with the President’s Award for Service to the Centre and to also present to him a token of our appreciation by giving him two tickets to the January 22nd Oilers game against the Dallas Stars. Hopefully the Oilers will win this game in your honour, Bruce.

This individual came to Edmonton for the summer and during that time, he has been very enthusiastic and very active participant in everything he could try. He has spent countless hours at the Observatory and made friends with many people in club very quickly. Although his time here was short, he did a presentation on observing in Iceland at a club meeting as well as doing a presentation at the Northern Prairie Star Party this past summer. He has since returned to Iceland, but in honour of his enthusiasm, I am awarding the Observer of the Year Award to Sverrir Gudmundsson. Unfortunately, Sverrir could not make it to this meeting tonight, so his plaque will be mailed to him. 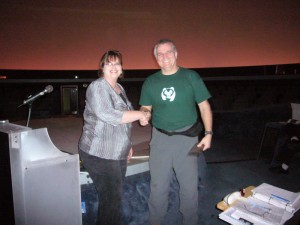 This individual has spent countless hours at the telescope capturing beautiful images of the celestial objects out there. His dedication is, in my mind, borderline crazy as he spends most clear nights at some dark sky site somewhere in Alberta in the middle of nowhere imaging, and then goes to work. I don’t know how he doesn’t fall asleep at his desk every day. There is no arguing with the results though. Such dedication easily shows in every stunning image he presents. He has shown his images at our meetings as well as to everyone at the Observer’s meeting every month. Everyone who has seen his images will agree with me that the Bryce Heartwell Memorial Award for Excellence in Astroimaging must be presented to Mike Noble. 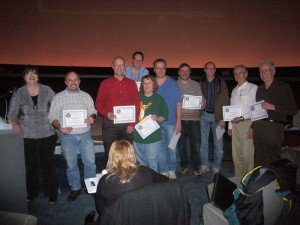 This was a very easy choice this year. This group of people spent hundreds of hours organizing and volunteering their time for several events over the year. Without them, the events would not have been the incredible success they were. Through their monumental efforts, the International Year of Astronomy was a rousing success for Edmonton and brought Astronomy to the forefront for many Edmontonians. It is my great pleasure to present this year’s George Moores Memorial Award for Excellence in Public Education to the IYA Committee and volunteers consisting of: Orla Aaquist, Cornelia Blunck, Harris Christian, Patrick Earl, Frank Florian, Sheldon Helbert, Doug Hube, Sherrilyn Jahrig, Franklin Loehde, Bruce McCurdy, Sharon Morsink, Ross Sinclair, Massimo Torri, and Luca Vanzella.

To recognize the efforts and hundreds of hours of every one of you that volunteered for an IYA event, I had a special certificate created for the IYA Volunteers that can perhaps hang in the Observatory. So in effect, everyone in the club can say they received this award this year. Great job everyone, and thank you! 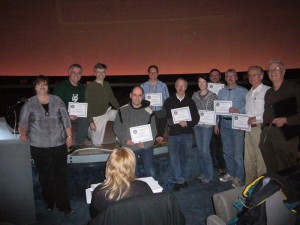 This project for the year came out of the blue, quite literally. On November 20th, 2008, a meteor was seen streaking through the night sky in Alberta, Saskatchewan, Manitoba and even North Dakota. It eventually fell near the village of Marsden, Saskatchewan. It didn’t take long for members of our club to join the hunt for a piece of history and soon everyone was swapping stories of their meteorite find. Many of the volunteers dedicated hours to the search, many returning to the site several times for days or weekends, between November 2008 and spring planting in 2009. It is this dedication in the pursuit of science that gives me great pleasure in presenting the Franklin Loehde Award for Project of the Year to the Buzzard Coulee Meteorite Search Teams, consisting of: Dale Nosko, Mike Noble, Alister Ling, Mark Zalcik, Bruce McCurdy, Franklin Loehde, Frank Florian, Doug Hube, Murray Paulson, Brad Newman, and Jen Newman.
Although they are not members of the RASC, a special mention should also be made to the following people that participated in the search as well: Sean Paulson, Dan Paulson, Connor Paulson, Joanne Osbourne-Paulson, Elizabeth Ling, Luc & Joan Guillemette, and Brian Moore.