The foundation of the Edmonton Centre was firmly established during the years 1932 to 1949 under the strong leadership of people like Dr. J.W. Campbell, Cyril Wates, Professors E.S. Keeping, Doug Crosby, E.H. “Ted” Gowan, Len Gads, H. Grayson-Smith and others. 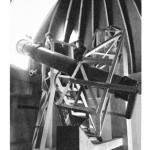 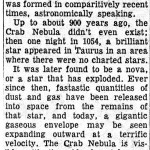 During this period Cyril Wates’ superb 12.5″ Newtonian reflector and unique mount was placed in a fine observatory on the U of A campus and, led by Dr. Campbell, was opened to the general public every Saturday night and opened many eyes to the splendor of the heavens. In addition to this Dr. Campbell reached many more through his weekly column called Astronomy Notes in the Edmonton Journal. 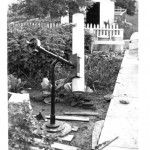 We all have our “moments of truth” when we discover our passion for astronomy and certainly my own is burned into my brain. While a cub scout in grade five I recall, like it were yesterday, the warm August evening when I left my weekly meeting with the other “cubbers” and turned right out from the door and was hit straight between the eyes with the awe-inspiring sight of Capella gliding over the northern horizon in the fading twilight. Wow! Amazing that this beautiful sight hadn’t been noticed before. A home-made telescope followed within 3 years. Not until Highlands Junior High School did I realize that the RASC existed until I spotted Dr. Campbell’s column in the Edmonton Journal and as a result attended my first Edmonton Centre meeting in September of 1952. Quite a shock it was as I was surrounded by these seemingly ancient, gray-haired professors! That first alarming impression quickly vanished at meetings-end during the social function of tea and fruitbread when they proved to be lively and deeply in love with astronomy and very supportive of my growing fascination with astronomy.

Within a month or two I was joined by another student by the name of Ian McLennan who, it turned out, was from the very same school I attended. Needless to say, we bonded rather quickly and created a pretty dynamic duo with its first activity directed towards an unsuspecting school north of the city that invited us to speak to them of astronomy and possible space travel. What we discovered was that the whole school from grades 1 to 12 was assembled to hear of our love of astronomy. From 9:00 am to 1:00 pm they held us captive forcing us to answer what seemed to be millions of questions. These two grade 9 students from Highlands were clearly overwhelmed by this interest in the skies. 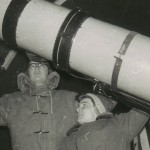 In early 1953 the real catalyst for action appeared in the form of a young high school student by the name of Earl Milton from the Montreal Centre. That Centre was a dynamic group that stressed the observing disciplines in astronomy. So when Earl appeared we quickly established observing committees like aurora, solar, meteor, photography etc. each with its own chair. When Art Dalton was added to the original three Earl referred to us as the Quatum Verate or the Big Four. It was during this year that Dr. Campbell’s Journal column was taken over by Ian and myself and, after his time became limited, I continued it and added the Medicine Hat News, the Calgary Albertan and the Vancouver Herald to the weekly feature. I was in high school at the time and terms like “can’t do” didn’t exist. We were all similarly inflicted with this disease. 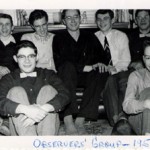 The Observers’ Group also was able to relieve Dr. Campbell at the U of A Observatory and enjoyed a good working arrangement with the ever-supportive professors. The Observers’ Group quickly grew in size and gender with even the down periods like cloudy weather and bright twilight handled with socializing activities like football, golf and wrestling competitions. For some reason the girls avoided the latter. That was disappointing. Nicknames abounded and two stuck to me – “T.Q.” and “Moses”

The Observers’ Group attracted a diverse cross-section of young people as their eventual vocations would reveal. Part of the 1954 group points that out. Earl Milton became an astro-physics professor and leading proponent of an electric universe, Art Dalton, after slicing rat brain sections locally, a major researcher in Alzheimer’s Disease, Ian McLennan the first director of the Queen Elizabeth Planetarium and now science-centre consultant around the world, Marcel Dalton a local publisher, and Dick Henry, a professor at Johns-Hopkins University and contributor to many NASA programs. Others went on to careers in medicine: Willie Hrudy, Rick Kehoe and Garry Marliss (now programming), Dave Marven – insurance company vice-president, Robert Allin – (teaching astronomy), Bruce Bohannon – (Manager of Kitt Peak) & Rick Salmon (CFHT Tech boss) etc. They still largely are in contact with each other.

Collectively the Group found the partial eclipse of the sun in June, 1954 the highlight of the year with our observing platform being the rooftop of the 12 storey Hotel Macdonald Annex! 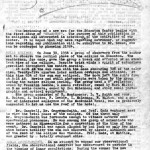 We are rightly celebrating the 50th anniversary of our newsletter STARDUST and its story begins in October of 1954 and it’s first edition. Contrary to our present editor’s claim that we used a Gestetner- that was high tech and we were not! What we did have was a gelatin roll, a soft rubbery material that could have COLOURED type placed upon it and after wetting it and placing a sheet over it and rubbing it gently produced voila the first issue edited by Earl Milton! And despite its ancient origins and its barely visible type it was the very first issue and the first coloured one too. A little note here some of the early issues were actually run off in the office of Swifts’ Packing Plant where I worked during the summers.

1955 too was a memorable year like for its Scopes’ Trial-like debate involving the feasibility of space travel with poor me and Professor Keeping losing the coin toss and Art Dalton and Dr. H. Grayson-Smith winning the opportunity to support the affirmative. The Edmonton Journal eagerly awaited the intense points made and flashed the results across its pages.

Both television stations and the Journal were involved in the second big 1954 event following a fireball reported over Lake Wabamun west of Edmonton. Ian McLennan and Willie Hrudey, after discussions with local farmers that winter, concluded that there was a real possibility of the bolide hitting the ice on the lake. For that reason Operation W.H.A.M. (Wabamun Hunt for Aqua-Meteorite) was born and involved the whole Centre, students and professors alike. That summer some 3 expeditions were launched in the hopes of finding the space gem. Many boats were used, scuba divers deployed and finally mine detectors from the army utilized but all in vain. Sad but fun. The Alberta community around us were certainly in our corner rooting for us.

The strong crowds out to the U of A Observatory convinced the professors in the Centre and the University itself to provide additional”warm space” for the volunteers and so the “Shack” was born in 1956. The “Shack” itself was just that a shack but the work crews brought it such a sparkling shape that it was used for many series of public lectures as well as more opportunities for the young members to prepare talks amongst themselves.

During all of this time, and without the benefit of the internet, we were making contact with the outside world primarily for the purpose of augmenting the knowledge we had gained from our varied observations. The Mars opposition of 1956 excited our young members and so many of us, especially myself, sent inquiries all over the world.

Letters from Japan, Germany, England and the US, some in languages we had to translate. The images here give you a flavour of the kind replies. Many of the group used the U of A Observatory and their own telescopes to produce some quite worthy sketches of the red planet like this decent composite from Ian, Art and myself. As a matter of fact the Calgary Albertan gave as us a front page spread of the Opposition. All before the Calgary Centre even existed.

In 1957 excitement, akin to the recent Hale-Bopp frenzy, developed in the appearance of two comets that revealed features that were considered unique at the time. With a sunward pointing tail Comet Arend-Roland appeared slipping over our northern horizon in the summer twilight. We here in Edmonton don’t realize the advantages we have in prowling that northern horizon above the twilight zone. Back in 1957 when the word came out that a new comet was nearing the sun and would soon reappear over northern horizons we in the Observers’ Group set out to spot it and so fanned out around the city. With my little 6 inch reflector I positioned myself near home at Eastglen High School and after a number of sweeps over the northwestern horizon spotted something entirely unexpected a sunward pointing tail in addition to a regular stubby one. I was beside myself to say the least. I rushed home to telephone the group that it was really, really there and had this unusual second tail. The observations that followed revealed a slow counterclockwise rotation of the anomalous tail and change from a narrow but long spike to a short fan pointing away from the sun. Despite the internet-less days of the time contact with Sky and Telescope revealed we may have succeeded, by a few hours, in being the first group in the world to see this mysterious tail. A very satisfying moment. Frosting on the cake occurred when yet another comet appeared later, a more “normal” Comet Mrkos.

1957 represented a year of intense study of the earth’s crust and atmosphere called the International Geophysical year or IGY. I was fortunate to work with AAVSO’s solar division for a few years and was asked to accept a large long-wave radio receiver/recorder set-up to detect solar flares using tropical lightning storms and their radio emissions off the re-charged ionosphere during flares. Miraculously it worked albeit with increasing radio interference from a US submarine base in Puget Sound.

1957 was also the year of the successful viewing of the Transit of Mercury and the first of many issues of BARDUST, the spoof of our love affair with astronomy. Can’t fail to mention the real catalyst for the world-wide popularization of astronomy and space travel in coming years and that was the USSR’s launch of Sputnik. Tracking it and hearing it on shortwave radio inspired many of us.

The year 1958 was pivotal for all of us and it started innocently enough with the desire by the City of Edmonton wishing to find a vehicle to commemorate the visit of her Majesty Queen Elizabeth 11 and Prince Phillip to Edmonton in 1959. A member, S.F. Page, suggests a public planetarium be built and reaches out to the public in the Edmonton Journal. As the saying goes “All hell broke out!”. Immediately Professor Keeping and Earl Milton formed a committee to oversee the action needed to convince Edmontonians that this idea’s time had come. In addition to preparing a presentation to City Council a number of service clubs were encouraged to support the idea and write to Council recommending Canada’s first public planetarium be accepted as our tribute to Queen’s visit and what was soon to the beginnings of the space race. Ian McLennan, now a CFRN news photographer, records for the television screen each positive club vote and airs it on the evening news. How could we miss? On March 9, 1959 the final City Council vote is 7 to 4 in favour of the planetarium and the Queen quickly approves of its name. A new era was about to begin.