*Outside events are weather permitting

Free Activities at the RASC Observatory at TELUS World of Science

1pm – 4pm: Gazebo next to the Observatory Telescope clinic: Bring your telescope and get helpful advice from our expert members.

END_OF_DOCUMENT_TOKEN_TO_BE_REPLACED

The RASC Observatory and the TELUS World of Science present International Astronomy Day.

All events are FREE!

* Outside Events Are Weather Permitting
Check @edmontonrasc on Twitter for updates on outside events.

Activities at RASC Observatory and the TELUS World of Science

Join our volunteers for Sidewalk Astronomy and enjoy the springtime night sky at the following locations:

* Outside Events Are Weather Permitting

The RASC will be setting up telescopes on sidewalks for free views of the Moon and Jupiter, at the following locations.

Members of the public came out for evening viewing on clear nights during the week of Astronomy Day 2015 (April 19th to 25th). They joined our volunteers for Sidewalk Astronomy and enjoying the springtime night sky.

Gazebo Park in Old Strathcona, on 83 Avenue between 103 and 104 Street 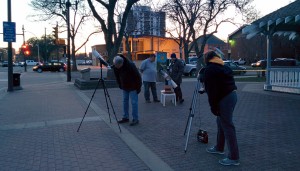 Three members were at Gazebo park sharing outstanding lunar viewing with about 80 members of the public. Many people who stopped by remarked on how sharp the Moon looked through the telescope.

Several lunar features were visible through the scopes, including:

The Promenade overlooking Victoria Park, on the south side of 100 Avenue at 118 Street 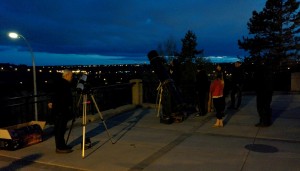 Four members made it out to the Promenade around 9:00pm. They had about 25 to 30 visitors viewing through a 12.5″ and a 5″ scope before almost solid cloud and few passers-by encouraged them to call it a day at 10:30.

The sky was partly cloudy with clear patches–more clear to the north and cloud to south. But there were quite a few good views of the Moon and/or Jupiter.

The seeing wasn’t great, but good enough to could faintly discern the Great Red Spot on Jupiter with the Jovian Moons’ discs fairly obvious at 215x in the 12.5″ scope.

The telescopic view of Earth’s Moon always amazes the general public, with great interest in views of Jupiter and many wows.

Venus was hanging in the West with Aldebaran to its lower left.

It wasn’t too cool, but a breeze necessitated good bit of extra clothing. The clouds posed a bit of a problem, but most visitors hung around for a few minutes or continued their walk returning later to catch a view.

The RASC Observatory and the TELUS World of Science present International Astronomy Day.

FREE. Outside Events Are Weather Permitting (check @edmontonrasc on Twitter for outside updates).
Saturday Update: We are ON for both locations! 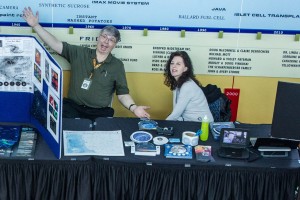 Visit us at our booth or join us for astronomy talks throughout the day.

Join our volunteers for Sidewalk Astronomy and enjoy the springtime night sky at the following locations:

Sidewalk astronomy was difficult this year as the skies did not cooperate. Both Friday and Saturday were mainly cloudy, but Sunday evening proved to be very nice so thanks to Larry Wood and Murray Paulson, two locations had sidewalk astronomy.

Friday, Apr 19, 8:30 – 11 PM
This was cancelled due to clouds, but…
From St. Albert, Murray Paulson reported “Well, I set up with the assistance of an innocent bystander this evening and had a total of 5 visitors before it started to rain. Highlights were viewing the moon thru varying thicknesses of haze and cloud plus astrophotos on my smart phone. When I noticed raindrops on my phone’s screen, I packed up, again with the assistance of innocent bystanders, and fled the site.” END_OF_DOCUMENT_TOKEN_TO_BE_REPLACED

Friday, Apr 27
CANCELLED DUE TO CLOUDS