Star Names – Their Lore and Meaning
by 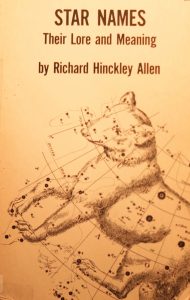 As we learn to navigate our way among the night sky’s constellations, we gradually learn more names of the most prominent and peculiar stars. But do we know the origins of all these names? Star Names – Their Lore and Meaning by Richard Hinckly Allen, the book now over half a century old, remains a reliable guide to the etymology of the stars and constellations. In the main section of the book, the author leads us alphabetically through the constellations, pointing out the history of the constellation name and those of the main stars. The Greek name origins figure prominently, but Arabic meanings as well as Chinese are mentioned. The comprehensive listing includes star groups long forgotten. For example, Custos Messium, the Harvest-Keeper, is a smattering of stars close to the North Celestial Pole; the constellation honors the French Astronomer Charles Messier, who in his time “harvested” several comets in the late 1700s. Marvel at the many strangely-named objects mentioned in the book. The 4th magnitude star Epsilon Delphini in China was known as Pae Chaou, the Rotten Melon. Or an alternate name for the Dumbbell Nebula in Vulpecula – the Double-headed Shot. The book will be available at the Lamplighter Library table before and after the RASC meeting.

The Lamplighter Library will not be accessible during the renovation of our usual meeting venue, the star theatre, but in the meantime a selection of books will be available outside the IMAX theatre before and after each meeting!