Annals of the Deep Sky Vol. 3 by Jeff Kanipe and Dennis Webb 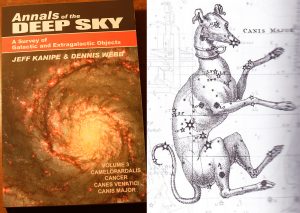 We are pleased to report that the newest volume of the Annals of the Deep Sky series by Jeff Kanipe and Dennis Webb has arrived! Volume 3 covers the constellations Camelopardalis, Cancer, Canes Venatici, and Canis Major. For each constellation, the history is explained (example: the illustration of Canis Major shown here), as well as the brightest stars, variable stars, and especially the deep sky objects contained in the constellation. There is a nice passage describing Kemble’s Cascade, a curious grouping of stars pointed out by Lucian Kemble, the amateur astronomer whose nickname is the inspiration for the name of our library, the Lamplighter Library.

Check out this book and hundreds of other books, at The Lamplighter Memorial Library, just off the entrance to the star theater.