The Transit of Mercury on November 8, 2006 Credit Brocken Inaglory (Own work) [GFDL]

A rare astronomical event will occur during the morning of Monday, May 9, 2016 when Edmonton skies will see a Transit of Mercury. A transit of Mercury occurs when the orbits of Mercury and Earth around the Sun line up in such a way that, from certain places on Earth, the planet Mercury can be seen to cross the face of the Sun over the course of a few hours. On May 9, as seen from Edmonton, the transit will be in progress at sunrise, which is at 5:41 AM! But you don’t have to get up that early to see it since the event will take a leisurely 7 hours to complete.

Planetary transits are among the rarest of astronomical events. To see Mercury transit the Sun, you’ll need the magnifying power of a telescope that is fitted with a specialized filter to protect your eyes (see Viewing the Transit Safely below). Viewed this way, Mercury appears as a little black dot slowly moving across the face of the Sun. The transit presents a rare opportunity to witness a planet’s orbital motion in real time.

The most recent transit took place a decade ago, on November 8 2006, and after the upcoming May event, you’ll have to wait until November 11, 2019, for you next opportunity. So don’t miss it!

Sequence of events as seen from Edmonton

Viewing the transit means viewing the Sun with a telescope that MUST be equipped with an approved, safe solar filter mounted over the front of the instrument. Unless you have such a filter, do not view the Sun through any telescope at any time! The RASC has two options to view the transit safely, skies and weather conditions permitting:

NOTE: Telescopes will be set up if skies and weather conditions permit. 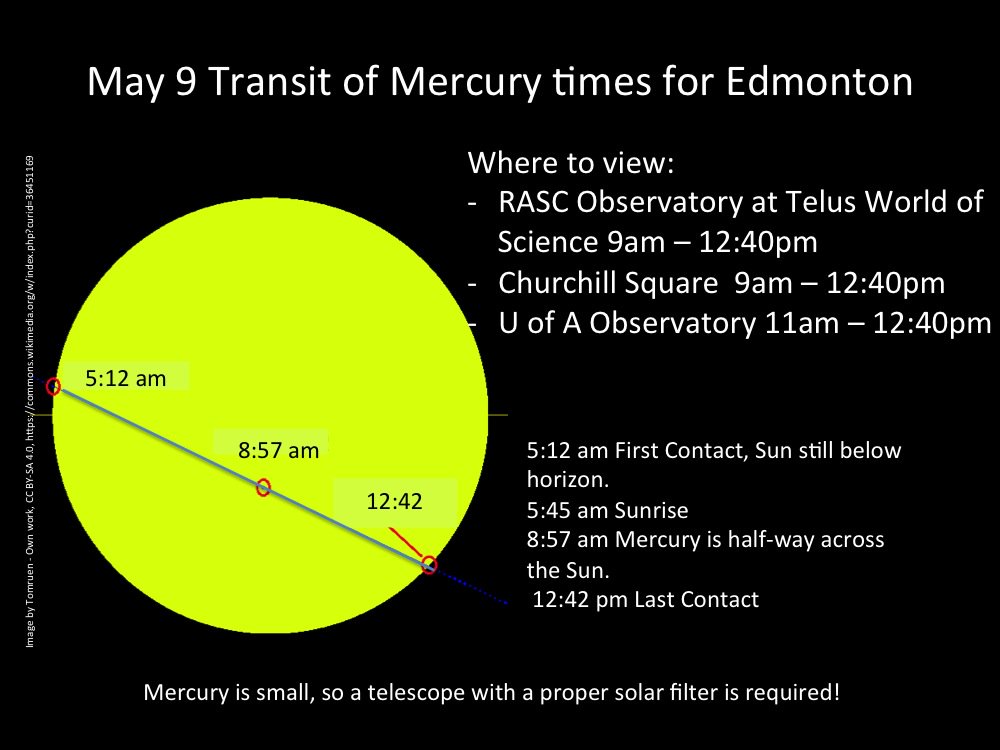 The transit of Mercury offers an opportunity to make observations and measurements to make the parallax of Mercury visible and – perhaps – to determine the distance to the Sun (as was done historically before modern methods became available). Students, teachers, amateurs and professional astronomers who are interested in systematically observing and evaluating the transit of Mercury are invited to join in this world-wide opportunity by contacting Udo Backhaus at http://www.venus2012.de/transit-of-mercury2016/. Note: this project is not affiliated with nor endorsed by the RASC.

This post has content adapted from the May/June 2016 issue of SkyNews magazine, Canada’s astronomy magazine, owned by the RASC.