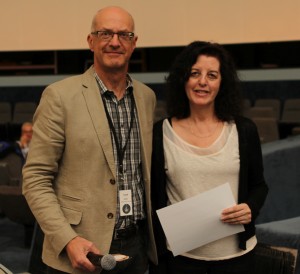 Sherrilyn Jahrig has been an Observatory volunteer and summer contract worker since 1996. She was integral to our MarsWatch event in summer of 2003, one of the most successful outreaches in the deck’s history. The following spring she received the Nate Ragosin Memorial Award recognizing the volunteer of the year within TWoSE.

She has been involved in the BHDSP from concept in 2004 to realization to the current day. Earliest meetings that I can remember were at TWoSE in 2004. She was one of the main drivers on the RASC Edmonton Centre committee that got the Dark Sky Preserve up and running in 2006 – a major achievement that was recognized with the Centre’s public education award that year.

In the years since it was declared, Sherrilyn has served the Centre internally as our DSP Coordinator, and externally on the BHDSP Working Group — a group she chaired for a number of years. In both capacities she has been instrumental in organizing the annual BHDSP public star party at Elk Island NP &/or Miquelon Lake PP, including coordinating RASC volunteers who provide the lion’s share of humanpower for this event.

Besides Beaver Hills, Sherrilyn played a role in the declaration of Jasper Dark Sky Preserve and Wood Buffalo Dark Sky Preserve, ratified in 2011 and 2013 respectively. She has also been a driving force behind the Light Efficient Communities Coalition, a second partnership between RASCEC and other invested community groups which held extensive talks with the City of Edmonton to achieve the City’s Light Efficient Community policy in 2013.

Sherrilyn has championed the night sky in various other undertakings, which include artistic as well as scientific pursuits. These include a night sky photography exhibit she organized at City Hall and astronomy-themed artistic installations at Pyramid Lake Island at the annual Jasper Dark Sky Festival.

It is for these impressive and long-standing efforts that I award the 2015 George Moores Memorial Award for Public Education to Sherrilyn Jahrig.