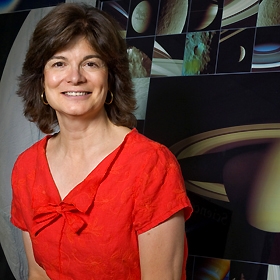 RASC Edmonton Centre
and
The Institute for Space Science, Exploration and Technology
present

In the Land of Enchantment: A Decade Exploring Saturn

A glistening spaceship, with seven lonely years and billions of miles behind it, glides into orbit around a softly-hued, ringed planet. A flying-saucer shaped machine descends through a hazy atmosphere and lands on the surface of an alien moon, ten times farther from the Sun than the Earth.

Fantastic though they seem, these visions are not a dream. For seven years, the Cassini spacecraft and its Huygens probe traveled invisible interplanetary roads to the place we call Saturn. Their successful entry into orbit in the summer of 2004, the mythic landing of Huygens on the cold, dark equatorial plains of Titan, and Cassini’s subsequent decade-long exploration of the saturnian environment have become the stuff of legend. What they have shown us, and the images they have collected, are being closely examined in the pursuit of invaluable scientific insights on the nature of this very remote planetary system.

Come along for the ride, and witness the sights and magic worked by these emissaries from Earth to the enchanting realm of Saturn.